published in the Concordia Journal February 22, 2007 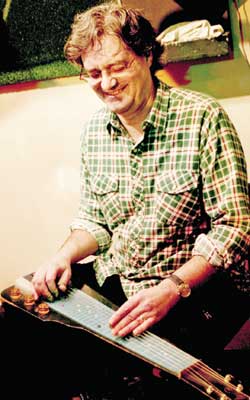 Craig Morrison has taught a lot of people about music, but the most important lesson he’s learned is the idea of music as service.

“Teaching is another passion of mine. It’s not just that I love this subject so I’ll teach it - I love teaching, and I really believe in the education ideal,” Morrison said. “I’m totally fascinated by my subject. And I’m still learning.”

Because of his knowledge, credentials and nearly 20 years of teaching night school and private lessons, McGill decided to give it a chance. Eventually, his class bulged with 300 students and a long waiting list.

By the time he began teaching at Concordia in 1997 as a PhD student, he’d already taught 10 different courses about the history of the blues, folk music, country and rockabilly, among others. The University of Illinois Press had also just published Morrison’s rockabilly book, Go Cat Go !, in its prestigious Music in American Life series.

“So when it came time to put [Rock and Roll and its Roots] together, I had reams of material,” he said.

Situating music in a social context, he brings in discussions of technology, race, class, migration and economics within popular music from around 1900 to 1965. Outside the university, he teaches private music lessons and group classes in people’s homes.

His enthusiasm for music is infectious, former student Sarah Geledi said. She rearranged her schedule around the class, and she wasn’t disappointed.

“I felt like a sponge absorbing every word he had to say about the music,” the Concordia graduate said. “He has broadened my music knowledge more than I ever imagined, and I’m honoured to be able to call him a friend today.” For Morrison, it’s a great honour to combine his love for music with his strong sense of community. He plays piano for palliative care patients, and also participates in Hillbilly Night at the Wheel Club on Monday nights. His reverence for life and community is something he shares with his older brother Brent, who taught him the greater value of music.

Morrison said that at the end of the day, music and teaching are really about the human connection.

“To me it’s a real privilege to teach music, but I think it could be anything, the sharing and encouraging and that passing on of knowledge, ideas, nurturing the development of the other. These are all things that are basically excuses for humans to get together and love each other.”