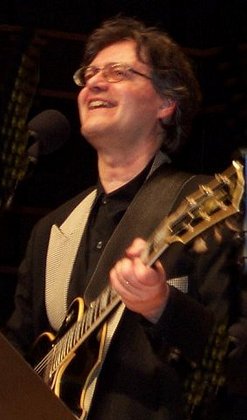 "Everywhere I go, I see the power of music, as an expressive channel, a healing energy, a unifier of people, and a binding force in society. It is a gift to be enjoyed by all."

I grew up on an island in the Pacific, in Victoria, British Columbia. It’s the honeymoon and retirement capital of Canada : I was a teenage music head in the land of the newly wed and nearly dead !

I was raised on records of Dixieland bands and vocal groups. My parents took me to see Louis Armstrong and Bill Kenny (the high voice of the Ink Spots). With my siblings I pumped the pedals of our player piano, learning old songs from piano rolls. I played clarinet in the high school band. There were variety acts at the annual Auto Show, hymns at church, kazoos and sing-alongs at Cub camp, and foghorns in the night. With friends I took the ferry to Vancouver to see Duke Ellington, also Janis Joplin’s farewell show with Big Brother and the Holding Company.

The Beatles and the British Invasion groups were thrilling, likewise the homegrown bands, the Vancouver R&B units, the intense Pacific Northwest Sound that came out of Washington and Oregon, and the folk rock and psychedelic styles from California, heard via Vancouver and Seattle radio stations. I bought my first guitar in 1966 and my older brother Brent taught me the basics ; we played in the downstairs coffeehouse in the church. My father says I would never have become a musician if not for our large basement : our bands always practiced there.

Curiosity about rock’s origins led me to downhome blues and jug band music of the 1920s and ’30s. Jamming with friends and a first band (folk and country rock) convinced me to pursue music and I studied jazz at the Berklee College of Music in Boston, absorbing country and bluegrass from a roommate, and taking in all kinds of live music in the city.

Back in Victoria to finish my music degree, fellow students and I formed Avalanche in 1973, an 8-piece band (4 rhythm, 3 horns, and a singer). We toured the western provinces with a repertoire of current hits and old rock classics. Click here for the story of the 1974 tour across western Canada.

Vacationing in Europe, I played acoustic guitar for my supper on Crete, for spare change in the subways of Paris, and for fun at ceileigh concerts in Scotland, picking up an interest in Celtic music.

On returning to Victoria, a number of short-lived bands provided my first experiences as a leader. In 1977, Vintage Rock ’n’ Roll Band, a successful outfit playing 1950s and early ’60s songs, brought me in as a keyboard player and vocalist and I stayed almost four years, until moving to Toronto for two years to go to York University, which turned me into an ethnomusicologist.

The rockabilly revival was happening and I began to research the style’s history, doing interviews in Mississippi and Tennessee. After I moved to Montreal in 1984, I was still fascinated by the subject so over the next decade I expanded my master’s thesis until it became a book : Go Cat Go ! Rockabilly Music and Its Makers, published by the University of Illinois Press in 1996.

During those years Craig Morrison & the Momentz gigged around Montreal and the province of Quebec, doing bars, conventions, weddings, and parties. We performed hundreds of times in all types of venues : nightclubs, hotels, reception halls, radio stations, studios, tents, gazebos, trains, synagogues, outdoor festivals, agricultural fairs, department stores, book stores,subways, hospitals, parks, classrooms, restaurants, and private homes. We specialized in rock and roll, and added in a few social dances, standards, and pop songs. In the greater freedom (and lesser pay) of the small bars, the repertoire was wildly eclectic, always including blues, rockabilly, traditional songs in new arrangements, obscure ’50s rock and roll hits, ’60s garage nuggets, and some originals. Now I play regularly with Vintage Wine, and the Momentz reunite with friends for our Annual Roots of Rock and Roll Concert, which began in 1998.

Early on, from giving guitar lessons I found a love of teaching. This led to many years of teaching night school classes, in public and private schools and colleges, and eventually to credit courses in university music departments. For years I’ve been giving Rock and Roll and Its Roots for Concordia University and many other courses (Music of the Beatles, Black Music, Pop/ Soul and Its Roots, Psychedelic Music, Montreal’s Festival Culture, and Musical History Tour - profiling the music tradtions of seven cities : Montreal, Detroit, Chicago, Memphis, Nashville, New York, and New Orleans). For five years, I taught Popular Music After 1945 for the McGill University music department.

My Ph.D. thesis was "Psychedelic Music in San Francsico : Style, Context, and Evolution." Currently I am working on a book based on the interviews that I’ve been conducting over the past 25 years with more than 100 pioneering musicians in blues, country, and rock.