But for James "Yank" Rachell (which he pronounced "ray-shell"), the mandolin, common in early string bands, nearly died out as a blues instrument. While a few others were recorded playing blues mandolin, Rachell not only recorded prolifically but brought the instrument into new contexts. He also played rhythmically interesting guitar. In later years he electrified his instruments at times, but his mandolin sound, characterized by biting fills and swirling lines, ever remained haunting. Over his nearly 70-year recording career, he left a deep musical mark on sides under his own name and in accompanying Sleepy John Estes, John Lee "Sonny Boy" Williamson, Washboard Sam, Henry Townsend, Big Joe Williams, and others.

In one of his most famous stories, Rachell remembers back when he was a "mannish boy" walking down the road, and he heard a neighbor playing a "tater-bug" (round-back) mandolin. Yank had never seen one and had to ask what it was, but he wanted it so badly he traded a pig for it. His mother was not pleased, and told him when he got hungry he could eat the mandolin. 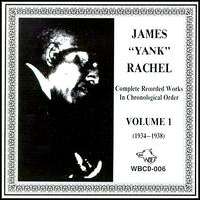 He picked up some tips on playing both mandolin and guitar from Hambone Willie Newbern (the first to record "Rollin’ and Tumblin’"), and developed a unique style. Often tuning his mandolin below concert pitch, he picked mostly with upstrokes, driving forcefully with rhythmic chops or intense, swirling lines made up of a bluesy series of repeated notes.

Rachell first recorded in 1929 in Memphis, with Sleepy John Estes. From those sessions comes "Diving Duck Blues," a song they wrote together, now a blues standard. Together they played in jug bands, backing Noah Lewis in 1930 on "New Minglewood Blues" (covered by the Grateful Dead). Rachell, Estes, plus pianist Jab Jones were the Three J’s Jug Band (John, James, and Jab), along with Hammie Nixon (harmonica, jug). 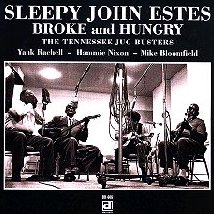 Yank left Tennessee and worked variously in Chicago, St. Louis, and Indianapolis, where he settled in 1958, raising a large family. Rachell, Estes,and Nixon reunited in the blues revival of the 1960s as the Tennessee Jug Busters. They appeared at the Newport Folk Festival in 1964 and hit the road again for many other concerts, including European festivals.

Rachell’s compositions have been covered by John Lee Hooker, Big Joe Williams, and Jimmy Rogers. His best-known song is "She Caught the Katy," recorded by Taj Mahal and popularized by the Blues Brothers in their movie. When I asked him about it at his home in Indianapolis, just weeks before his death, Yank said it was the only one of his songs that ever brought him royalties. As for what the Katy was, he said Taj Mahal just misheard the lyrics. "I didn’t sing about no Katy, I sang ’my baby left town, left me a mule to ride, when the train left the station, the fool mule lay down and died.’"

One of Rachell’s last associations was with John Sebastian and the J-Band, getting together for recordings and concerts even to the final weeks of Rachell’s life. (Sebastian’s band the Lovin’ Spoonful was the most jug-band influenced of the popular ’60s rock groups). One of his last public appearances was a benefit concert, organized by local musicians who had long known and played with him. Held in January 1997 in Indianapolis, all talent, energy, and equipment were donated, and Yank received more than $5000. Opening the show was John Sebastian and the J-Band, including jug and washtub bass virtuoso Fritz Richmond (formerly of the Jim Kweskin Jug Band).

After a few jug band classics and Lovin’ Spoonful hits from Sebastian and his band, Yank gingerly walked from his wheelchair to a chair at center stage, receiving a standing ovation. Once his arthritic thumb was straightened by wrapping it with a piece of gaffer tape (taken from under the washtub bass), someone passed the mandolin strap over his head. Rachell got a good laugh when he said "did y’all see this man putting these ropes on me like I was a mule ?" Admitting he’d been under the weather—"I’m 35 years old, now nobody never gets 50"—he launched into "a little jump," singing "the blues ain’t nothin’ but a good man feeling bad." In fine form, with sympathetic backing by the "guests down from New York" and his Indianapolis friends, we heard pure blues magic. Yank was happy, saying "I would dance, but I can’t walk !"

A gospel quartet interlude was provided by his two daughters, and two grandchildren (he has twenty-five). One of them backed a few of Yank’s songs with her electric bass, and many of his forty great-grandchildren were in the audience. Wrapping up a wonderful night of music, the J-Band played "Milk Cow Blues," a song Rachell recorded with Sleepy John Estes in 1930 but had not played in years. Yank joined in, sang a couple of verses—"went upstairs to pack my leaving truck, didn’t see no whiskey but the blues made me sloppy drunk"—and looked completely transported.

James "Yank" Rachell died at his home in Indianapolis on April 9, 1997, aged 87. Right until the end, Rachell’s lovely blues mandolin playing was as distinctive and thrilling as on his old records. Yank Rachell is gone, but he leaves a legacy of great blues music and a deep imprint on vast numbers of musicians and fans who were touched by this gracious, kind-hearted, and charming man.