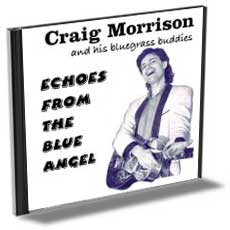 Buy now from this website : $18 Canadian, includes free shipping from Montreal to anywhere, plus autograph if requested.

If you prefer you can buy it from www.cdbaby.com for $12.97 US and have them calculate the shipping cost. Also you can hear excerpts of all the songs at this website ! Click link below to go to cdbaby.com.

To download the MP3, right-click on the MP3 and save the file on your computer.

SEPTEMBER 19 (Monday), 2005. Craig Morrison & his bluegrass buddies launched the CD edition of Echoes From the Blue Angel, recorded in 1990, by performing seven songs from the album. The launch was presented within the context of the regularMonday night Hillbilly Night. 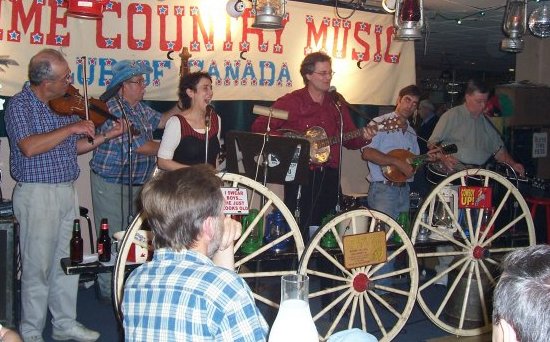 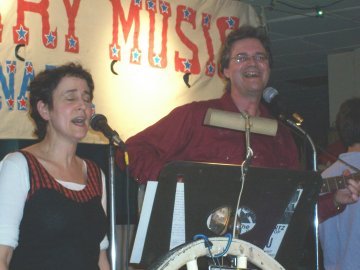 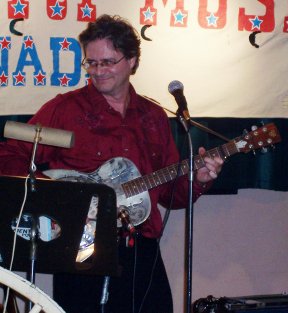 I’m out in the backyard here and listening to your CD as I did last night. Craig, I’m really enjoying it. All of them are extremely nice but there’s one that really stands out and that’s the “The Blue Angel Song” - what a nice touch. Most enjoyable and I thank you again for the wonderful album. - Harold K.

I think your CD is totally awesome. I’ve been listening to it about twice a day. - Andie S.

Craig, I’ve just been through this album twice in a row and it’s just fantastic ! I’ve had so much fun. I’m really grateful to you and I want to thank you for resurrecting it, and at great expense to yourself as well. You are #1 on the home hit parade. - Steven M.

Just wanted to tell you that I’m really enjoying the CD. What a "gem"  ! - George U. 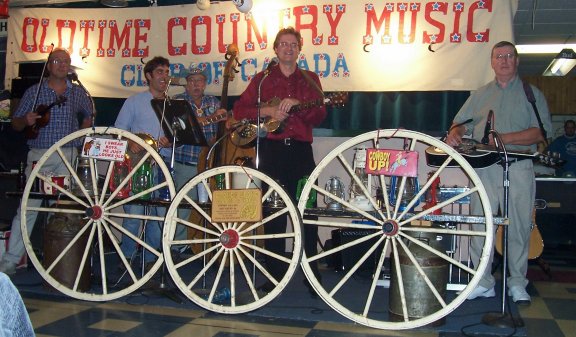 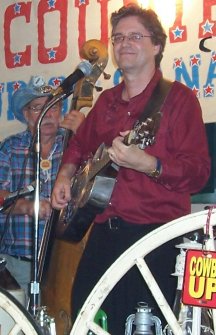 “If you’re ever in Montreal and you’re free on a Monday night...” For almost 40 years there’s been Hillbilly Night. When these recordings were made, in 1990, it was being held at the Blue Angel on Drummond Street downtown. For the last decade or so, since the original location was taken over by a restaurant, it’s been held at the Wheel Club in Montreal’s N.D.G. (Notre Dame de Grace) district. It was started by Bob Fuller 39 years ago and still run by him.

Hillbilly Night is an internationally-known event that welcomes all who are in favor of or at least open to Old-Time Country Music. It is attended by the young and the old, the French and the English, the ladies and the gentlemen, the hip and the square. Singers, whether amateur or professional, do two songs each in a rotation backed by a pool of able players. Styles covered include bluegrass, western swing, rockabilly, honky tonk, skiffle, old-timey, fiddle tunes, hillbilly, country boogie, Nashville Sound, and then some. You haven’t seen anything like it. This event has built a real and expanding community, and is a jewel in the cultural world of Montreal.

1. Joint Bank Account. I found this song on a vinyl LP called Rock & Rock-a-Billy again released in 1980 by the Dutch company White Label, during the period when the rockabilly revival took off in Europe. Various labels, usually run by record collectors, began reissuing records that had been made decades earlier in the United States. I bought many as part of my research into the style’s history, which culminated in my book Go Cat Go ! Rockabilly Music and Its Makers (University of Illinois Press, 1996). The song, more honky tonk than rockabilly, was written and recorded in the 1960s by Bill Lancaster who released it himself in on a 45rpm single. It seems nothing more of him is known to collectors.

2. Little Joe. This song, also known as “Darling Little Joe,” was recorded by the Carter Family in 1934. My arrangement was inspired by the first version I heard : Norman Blake’s, from his album Back Home in Sulphur Springs (1972).

3. I Can’t Quit (I’ve Gone Too Far). The great country star Marty Robbins wrote this. It was issued in 1956 on the flip side of his hit “Singin’ the Blues.”

4. Drifting and Dreaming. The full title is “Drifting and Dreaming (Sweet Paradise).” The 1925 sheet music cover, which shows that it was popularized by Ted Lewis, calls it A Hawaiian Love Song, Fox Trot with Ukulele arrangement. George Olsen, a popular sweet-band leader, had a hit with it in 1926, and it was redone as a slow instrumental on a Hawaii Calls album. I know it from childhood, from hearing my mother’s copy of Vera Lynn Sings Songs of the Twenties. Lynn was England’s most popular female singer during World War II era.

5. Fuller Blues. I learned this from Sam McGee’s Grand Dad of the Country Guitar Pickers. Mike Seeger, of the New Lost City Ramblers, recorded him in 1970 in McGee’s hometown of Franklin, Tennessee. With his brother Kirk, McGee’s career goes back to the 1920s. They recorded prolifically and were early members of the Grand Ole Opry. 6. Lonesome For My Baby. I learned it from Ernie Chaffin’s 1957 recording on the Sun label of Memphis.

7. Your Old Standby. Jim Eanes and the Shenandoah Valley Boys recorded it in 1957. Eanes, a bluegrass singer, wrote it and it did well for him. George Jones, in a duet with Gene Pitney, revived it in 1966.

8. Legend In My Time. This is one of the many great Don Gibson songs from the late 1950s. 9. FOD. This is likely an old minstrel song. A folk song collector got it from a migrant farm worker in California in 1941, and 15 years later it came out on a Library of Congress album called Anglo-American Shanties, Lyric Songs, Dance Tunes, and Spirituals. That’s where I found it and added it to my repertoire of children’s songs for its odd imagery and the fun of shouting out the nonsense word each verse. Kids like it !

10. The Blue Angel Song. Bob Fuller, Hillbilly Night’s founder, Jeannie Arsenault, the event’s goodwill ambassador, fiddler Bill Bland, and singer Billy Anthony are among those named who are still Monday night regulars. Rocky Rodgers now plays in heaven’s hillbilly band, Chris Quinn has moved to Toronto, and several of the others mentioned are either departed forever or have drifted away. To bolster the old timers, a whole new crop of people have become part of the family.

12. Rockin’ With Red. Written by albino bluesman Piano Red, who had a hit with it in 1951, this became a rockabilly standard when done by Little Jimmy Dickens, Roy Hall, and others. It was sometimes renamed “She Sure Can Rock Me.”

PURCHASE WITH PAYPAL OR CDBABY BUTTONS ABOVE, OR BUY IN MONTREAL :

Echoes From the Blue Angel is available for $15 on Monday nights at Hillbilly Night at the Wheel Club, 3373 Cavendish Boulevard, in Montreal’s N.D.G. district.