and all over the net !

"a definitive study of rockabilly music. This book is a gem ! Unlike most rockabilly mavens, Morrison is a professionally trained musician, a lucid writer, a savvy sociologist, and a critical yet balanced evaluator of singers, songwriters, and songs. The blending of such theoretical strenghth and musical knowledge is rare among popular music commentators. The genius of this investigation resides in the author’s pursuit of cultural meaning rather than just stylistic definition." - B. Lee Cooper, Popular Music and Society 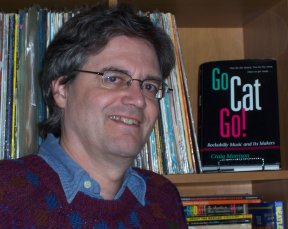 "He brings considerable erudition and a genuine flair for rockabilly to this highly readable music history.... Likely to become the definitive study of rockabilly" - Richard W. Grefrath, Library Journal 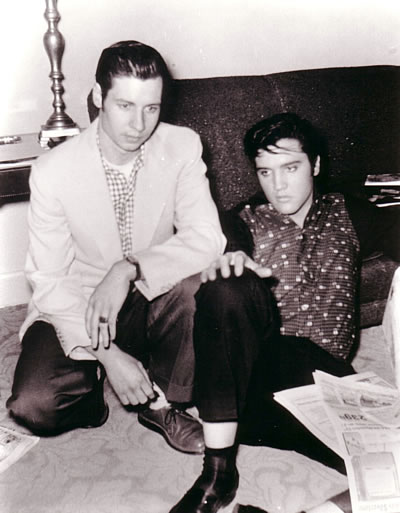 "You wrote the best book I’ve ever seen on rockabilly. You covered the whole scene, young and old." - Glen Glenn, 2007

Almost everything you wanted to know about rockabilly ! ...Deserves to be on every rocker’s bookshelf ! - Mike G (London, England)

Good Cats Good !!! This book is without any doubt the best out there. Besides good biographical stories about bands and artists, you get to know a whole lot about the MUSIC rockabilly. This book also covers the cultural and sociological aspects of rockabilly. I’ve just finished my major essay at the University in Trondheim (Norway)-studying music-and Morrison’s book has helped me a lot. From the 50s, to the revival, and up to the present, Morrison’s book covers it all !!! - Jon Solberg (Trondheim, Norway)

A Good Place to Start. I enjoyed reading this book and finished it within the week. It’s mostly an expanded-overview of the major figures of rockabilly from the 50’s through the 70’s. This isn’t a comprehensive book but that’s not its intent. The outline is structured by either region or eras. It also explains when and how they started, and where they are now (if they’re still around). There’s also a chapter devoted to the semi-recent revival (up through the early 90’s, thereby missing most of the bands that sprung up after the BSO struck it big). Also includes a recommended listening chapter. - Jerome McManus (Laurel, MD United States)

All about it. I am researching about rock’n’roll, rockabilly and other rhythms of the ’50s and ’60s. I am enjoying this book very much and it has been very helpful to me, not only because of the loads of info about history, bands, etc. that it contains but also for the suggested reading & listening lists it gives. I strongly recommend it. - Laura (Buenos Aires, Argentina)

One of the best overviews. Morrison’s book is one of the best overviews of Rockabilly History that I’ve read. There is nothing too in-depth here, but this book is not meant to do that. Instead you get the why’s and how’s of early Rock and Roll, the definition of what makes Rockabilly, rockabilly. You get bio’s of the major, and many minor, movers and shakers of the rock and roll movement of the 50’s. This book gets your foot in the door and past Elvis into the coloured and varied history of the scene. From here you can search out bio’s and records on Gene Vincent, Eddie Cochran and The Rock and Roll Trio. A nice appendix included here is a listing of important Rockabilly albums and compilations that one can still find on the shelves. Now that you know the history you know what records to buy to experience that history. - Vincent J Gudzinskas (St. Pete Florida)

Originally perceived as a pejorative term, the word rockabilly has become synonymous with mid-1950s Elvis Presley-influenced rock & roll. The style regained its popularity in the late 1970s, which was when it sparked an obsession in Canadian author and musician Craig Morrison. His exploration of the genre, GO CAT GO !, is a tour de force of musical scholarship. Morrison delves into the roots of the music, with profiles of its major practitioners, such as Gene Vincent, whose leather-clad persona introduced rockabilly to a pop audience ; Johnny Burnette, whose roots in the music were abandoned for mainstream success ; and Hasil Adkins, who remained faithful to his wildman image over several decades. With chapters dedicated to examinations of the different regional styles into which the music evolved, from Tennessee to California, Morrison’s combination of enthusiasm and erudition makes GO CAT GO ! an entertaining and instructive study.

Penned by Montrealer Craig Morrison, Go Cat Go is a thorough exploration of the musical phenomenon known as rockabilly. What emerges in Go Cat Go is a first-rate account of a short-lived musical style which Carl Perkins described as "a country man’s song with a black man’s rhythm." Morrison presents the reader with an open definition of style, a complete investigation of rockabilly’s antecedents and historical origins, an inclusive account of its movers and shakers, rockabilly’s geographical variations, its demise and renewal, notes about the present and complete bibliography and discography.

Of interest is Morrison’s claim that the definition of the music as rockabilly—derived as a term of contempt from rock ’n’ roll and hillbilly—did not begin until two decades after its demise. Morrison leaves the definition open-ended while providing a deft history of the nomenclature. Essential to the genre is a blues structure with strong rhythm, emotion, and a wild vocal style. A superb history is given of rockabilly’s growth from the traditions of western swing, bluegrass, country boogie, and rhythm and blues.

Go Cat Go rightly finds the home of rockabilly in Sam Phillips’s Sun Studios. Using the trio of guitar, bass, and drums, Phillips’s recording techniques, most notably slap back echo, crystallized the style’s rhythmically dense sound. Morrison argues that if there was rockabilly before Elvis, it wasn’t like rockabilly after Elvis, and it may have been Elvis’s concretization of the style which led to the demise of its popularity. He also demonstrates that rockabilly record labels were plagued by distribution problems and mentions other causes which limited the growth of rockabilly as a musical style. The style is also broken down into its geographical variants.

Morrison should be commended for his thorough investigation of regional communities of musicians, as he should for his account of women in rockabilly. Of equal importance is his account of the rockabilly revival. He has collected enough information to make a fascinating read.

Morrison is able to trace a fascinating history of many of those who worked in the industry. He pays fair attention to those that have stayed on the circuit, touring Europe and feeding off the frenzy generated by nostalgia traders. Through this he provides an introduction to many little-known moments.

One can take issue with Morrison’s claim that rockabilly died a death and was revived. Though this claim has some validity, it works only if you use the commercial success of Elvis as a measure. It may be that Elvis is the anomaly and that the status of rockabilly has been constant. Perhaps Morrison should content himself with knowing that this style will not disappear and that most large centres feature performers who at least dip into the genre.

Be that as it may, Go Cat Go ends with a comprehensive bibliography and a discography which could keep any record collector occupied. Well recommended.

"a rich matrix of perceptive description and astute analysis"

In GO CAT GO ! (University of Illinois Press), Craig Morrison collects stories about the talents whose music became known as rockabilly, from Carl Perkins, Gene Vincent, Wanda Jackson, Jerry Lee Lewis, Elvis, and Eddie Cochran, to revivalists like the Stray Cats. Many of Morrison’s tales relate to song lyrics. He drolly notes, for example, that Perkins’ song "Everybody’s Trying to Be My Baby," in which he mentions being awakened at four-thirty AM by "fifteen women knocking at my door," was "very likely not a fantasy." Embedding the stories in a rich matrix of perceptive description and astute analysis, Morrison provides a scholarly bibliography and useful discography to boot.

You don’t hear much about rockabilly these days, but 40 years ago it changed the face of popular music forever. Led by Elvis Presley’s curled lips, swivelling hips and the piano-thumping antics of Jerry Lee Lewis, a group of young white musicians from the American mid-South introduced the world to songs like "Blue Suede Shoes" and "Whole Lotta Shakin’ Goin’ On"—music that paved the way for contemporary rock and roll.

"That’s the key to rockabilly—the fact that it blended both white and black musical traditions," explains Morrison, a teaching award winner for his popular McGill courses on rock and roll history. Rockabilly’s pioneers were "young white musicians who grew up with country music, but who really got turned on by the rhythm and blues they heard on black radio programs and in mostly black clubs."

Morrison savours rockabilly’s "inspired energy." He did his master’s thesis on the music, and his own band the Momentz (which recently played at Open House) performs some rockabilly classics.

Rockabilly’s time in the sun was brief—Elvis and rockabilly’s other leaders eventually gravitated to other forms of music. "It’s such a small and narrow style, many performers find it wears out of possibilities quickly," says Morrison. Still, he’s confident rockabilly won’t ever disappear completely. Morrison notes there are plenty of fanzines and festivals devoted to the music and rockabilly is still regularly heard—even in countries like Japan and Finland. "All it needs is one big hit and it will explode all over again."