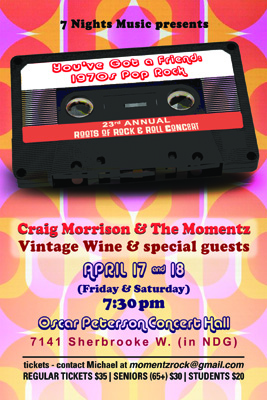 7 Nights Music is proud to present

Admission $10. PLACES ARE LIMITED. Make your reservations ASAP to be sure you’ll get in : 514-489-3322 (leave message). Vaccination passports will be verified at the door. See facebook event page here (and share it with your friends).

Join Vintage Wine for dinner and a show featuring rock and roll and soul from the 1950s to the 1970s. For dinner, you can sample the Wheel Club’s new ? la carte menu of absolutely delicious Asian dumplings of all kinds, served in dinner-sized portions with soup and/or salad - see menu here .

For those that can’t be there in person, we will be live streaming the second set at 9pm ET in high quality video and audio. Voluntary donations in support of the band and the Wheel Club are welcome.

Where were you in the 1970s ? If you were near a radio, you can likely fill in the blanks : Elton ____, Fleetwood ____, Cat _____, _____ Frampton. The eagerly anticipated theme for Craig Morrison’s 23rd annual Roots of Rock & Roll Concert is 1970s Pop Rock. The Seventies were a great time for pop rock, with so many styles : singer/songwriter, progressive rock, hard rock, country rock, disco, and punk. Songs in the show include “Wild World,” “One of These Nights,” “Smoke on the Water,” “Band on the Run,” “Sultans of Swing,” and “Joy To The World.” This usually sold-out concert takes place at the beautiful Oscar Peterson Concert Hall at Concordia University’s Loyola campus in NDG.

A popular aspect of these concerts is Craig Morrison’s spoken introductions to the songs, putting them into context. Each year, the concert features a different theme, chosen to offer audiences what Morrison calls ‘educational fun’, “Nostalgia, yes, but I also share an overview of a particular phase of the development of music, with a mix of hits and historically important lesser-known songs,” he said. On the big screen behind the band, each song is illustrated with a photo showing who performed and/or wrote it along with its title and date. At Concordia University, Dr. Morrison teaches various courses : The Beatles, Soul Music, Rock & Roll and its Roots, Psychedelic Music, British Popular Music, and Musical History Tour, as well as lecturing at various institutions from the Montreal Museum of Fine Arts to the Cummings Centre to local libraries. About Morrison, Montreal Gazette columnist Bill Brownstein wrote : “He may be the hippest prof around.”

Morrison was drawn to this year’s theme, “I missed the Seventies, the radio, the repertoire, and my pre-internet brain !,” he said, adding, “Creating and producing these concerts is a labour of love and a family reunion of musicians and friends.”

Bernard Perusse of the Montreal Gazette, in reviewing the Buddy Holly and Friends concert wrote : “It was a night of songs from one of the most enduring bodies of work in rock n’ roll history, delivered with self-effacing devotion by true believers playing the hell out of them.” Along with Buddy Holly, past concerts have paid tribute to Bob Dylan, The Beatles and the British invasion, soul and Motown, movie soundtracks, legendary music festivals (Newport Folk, Monterey Pop and Woodstock), and music from California, Canada, Nashville, New Orleans and New York. Each theme is chosen because it is one of Morrison’s research interests.

Drummer/vocalist Gary Sharkey said : “In the 18 years Craig and I have been together we have accomplished magic. The team of players is a great asset and the energy is amazing. We have been blessed with all the talent on stage ; the women are fabulous as are the rest of the musicians that contribute to this fantastic annual show.” From vocalist and music therapist Samantha Borgal, who has participated in seven previous editions : “This show is great musicians having a great time that energizes everyone in the hall. It always brings something joyful and familiar. Where else can you listen to music you love while learning a little bit of something new ?”

Fans of the concert series often send in unsolicited praise : "You and your musicians were enjoying the concert as much as we loved it in the audience." “This is a tradition that we always look forward to !” "You and your band and guests put on an amazing show each and every time, providing first class entertainment and musical excellence.”

Morrison, an ethnomusicologist, author, teacher and musician, is a native of Victoria BC, and has made his home in Montreal since the 1980s. At first playing in the metro for coins, while playing the bar circuit with his band and teaching evening courses at McGill, he revised his master’s thesis for publication ; Go Cat Go ! Rockabilly Music and Its Makers was published by the University of Illinois Press. Since then, he earned a Ph.D. from Concordia University with a thesis called “San Francisco Psychedelic Music” and wrote a second book, an A-to-Z encyclopedia, American Popular Music : Rock and Roll, published by Facts on File. A love of music was instilled in the family home, where growing up Morrison was entranced by his mother’s record collection, and learned old songs by pumping the pedals of a player piano. All of his early bands practiced in his home ; his dad once said, “If we hadn’t had a basement, you never would have become a musician.”