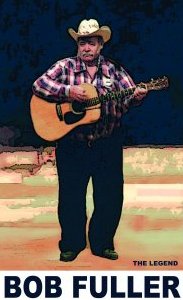 Hillbilly Night is an internationally-known event that welcomes all who are in favor of or at least open to authentic country music. It is attended by the young and the old, the French and the English, the ladies and the gentlemen, the hip and the square. Singers, whether amateur or professional, take turns backed by a pool of able players. Styles include hillbilly, bluegrass, fiddle tunes, honky tonk, western swing, country boogie, rockabilly, folk, and skiffle. This event has built a real and expanding community, and is a jewel in the cultural world of the city.

And so he started up Hillbilly Night

To keep it alive !

For first-timers, Monday night at the Wheel Club can feel like a time warp, where plaid reigns supreme and the sight of a cowboy in full regalia is not the least bit unusual. Christmas lights hang from the wagon wheel over the entrance year round, and might give off the impression that time has indeed stopped completely, if only for a night. 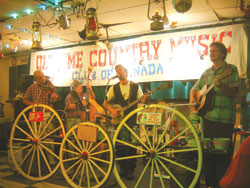 Hillbilly night at the Wheel Club

At about 9 p.m., a steady rotation of finger-pickin’ country musicians come to the Wheel Club to be part of what is now a 40-year tradition, performing old-time country music in its original acoustic form during hillbilly night. The music ranges from bluegrass to rockabilly, honky-tonk to Nashville, Hank Williams to the Carter family, as well as traditional folk songs from all over Canada and the United States.

Hillbilly night was started by country bassist Bob Fuller, who used to work as host and entertainer at the Blue Angel, a country western bar on Drummond St.

McGill students Ben Arsenault, 19, and Dave Grouber, 18, both working on their bachelor degrees, have been coming to Hillbilly Night since they first found out about it shortly after their arrival in Montreal. Arsenault, originally from Vancouver, and Grouber, a native of Toronto, were brought up on country and bluegrass music, and after hearing about the Wheel Club, found themselves at home.

“I wasn’t expecting to find such a good community for this music,” said Arsenault. “People here are serious about their musical heritage.”

“And everyone is so friendly,” said Grouber.

The crowd is all smiles when hillbilly night hostess Jeannie Arsenault (no relation to Ben), comes around to each table to sell 25-cent raffle tickets for the midnight draw. Arsenault says she enjoys the presence of the younger folks and is happy that they are helping the tradition live on. “They’re discovering it just like I did,” says Arsenault, who has been coming to hillbilly night ever since she found out about it 32 years ago.

In fact, she has only missed eight times - due to blizzards and a foot operation. But she doesn’t show any signs of letting up anytime soon.

Always the first one on the dance floor, Arsenault also joins the band on a few numbers, playing the upright bass that towers over her head. The real treat is to hear her sing, belting out tunes with a booming voice reminiscent of the late June Carter.

“Hillbilly night just feels like home, like the town I grew up in,” says ethnomusicologist professor Craig Morrison, who was born and raised in Victoria, BC, and moved to Montreal in the mid-1980s.

Morrison is a talented musician in his own right. On one Monday night, the professor played a mini featurette to celebrate the relaunching of his album Echoes from the Blue Angel.

Morrison believes reviving and preserving music is a way to bring people back to tradition, and provides a link between the old generation and the new.

Bob Fuller, born in Nova Scotia in 1933, started Hillbilly Night in Montreal in 1966. In a 2001 interview with Craig Morrison, Fuller said :

“Hillbilly Night is a mission. I’m a missionary. I saw myself as probably the only one who could or would do it. Nobody else would be foolish enough to put all the time and effort into it. I have the equipment, put together over the last 35 years, to do whatever I wanted in terms of picnics, festivals, things like that. I had the record collection to back it up, and the knowledge to make available all this stuff to anybody that was interested. I always said to myself that some night I’ll come and nobody will show up and I’ll have to sing all evening, but it’s never happened.

The mission came from the fact that they were manipulating the music. Nashville was going downhill. By the mid-1950s everybody was trying to be rockabilly and the powers that be in Nashville had to get together to decide what to do. What came out of it was the Nashville Sound, which is not country music. It went in two directions : either orchestral or rock. And folk married rock music, and they manipulated it. That’s where I got my sense of mission. They made me angry by taking my music away. I may not be able to do much, but whatever I can do, I’ll do it. It’s something that has to be done.

I can remember the particular time. I was playing at the Blue Angel then, and I was sitting in my basement apartment watching the noon movie on TV. Christ, I said, I’m sitting here watching a movie in the middle of the day, and country music’s going down the tube. So then I started to formulate ideas, we can do this, we can get a newsletter out, we can have Hank Williams picnics [Fuller produced at least nine annual ones], use whatever, ‘cause I had band experience from out west. It all started to come together.

Country music is loyal people ; you can’t change ‘em. Somebody who likes a Ford will have a Ford for the rest of their life, same with this. We have people that swear by old time music. They might not like the particular artist that I like, some’ll like cowboys, some’ll like fiddling. We lump it all together, the cowboy, the mountain music, the bluegrass, the hillbilly, and all the rest of it, call it old time music. The club [The Old Time Country Music Club of Canada, Bob Fuller, secretary] gives us credibility. We actually have members in about 20 countries. They can’t come, but they want to be part of it.”