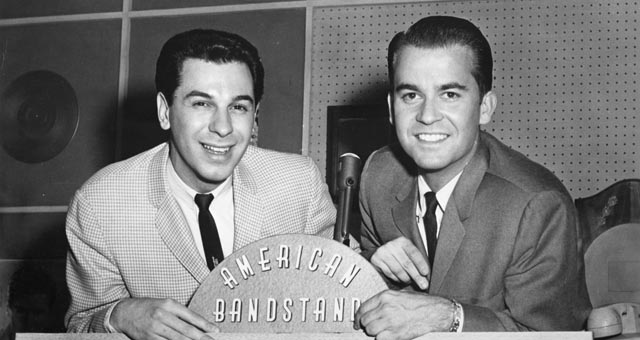 Freddy Cannon had 23 hits on the Billboard charts, including “Tallahassee Lassie” and “Way Down Yonder in New Orleans” (both 1959), “Buzz Buzz A-Diddle-It” and “Transistor Sister” (both 1961), “Palisades Park” (1962), “Abigail Beecher” (1964), and “Action” (1965), the theme of Dick Clark’s daily television show Where the Action Is. He got his nickname “Boom Boom” because of the big beat on his records. I knew all these songs from hearing them on the radio as a kid, and I’ve been performing “Palisades Park” since the late 1970s.

The first time I saw Freddy Cannon perform was 1985, as part of a concert in Montreal, hosted by Dick Clark, that also included Little Anthony and the Imperials, the Shirelles, and Bo Diddley. It was the entertainment for a convention of managers of McDonald’s restaurants, and I was there because my band had played two sets of oldies in the afternoon to set the mood.

The interview took place April 13, 2013, backstage at the Rialto Theatre in Montreal, before his performance in a show with the Crystals and Shirley Altson Reeves, the original lead singer of the Shirelles. Cannon was in fine rock and roll form and did a strong performance backed by the Tommy C Band of Detroit. Click here for a review of the show.

Before I started recording the interview, Cannon told me that “Tallahassee Lassie” was a poem that his mother wrote, to which he put the chords. I asked him about the old songs that he recorded, like “Way Down Yonder in New Orleans,” and he said they were not his choice and he didn’t really want to do them. 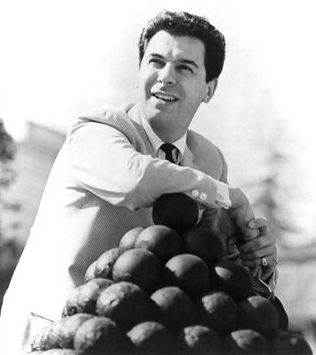 Craig Morrison : I’ve read that your father was a musician.

Freddy Cannon : My father played trumpet, Louis Prima songs and stuff like that. He played weddings and bars in Massachusetts. He was good, he played very, very well, and he sang good.

CM : Did you ever try to pick up the trumpet ?

FC : No, I play rhythm guitar.

CM : The first record you were on, you were playing guitar I think.

CM : But on your own records, did you play guitar ?

FC : [On] “Tallahassee” I played rhythm. Kenny Paulson was playing lead in it, a guy from Beachmont, Massachusetts.

CM : The one who played with Ronnie Hawkins ?

FC : That’s him. His nickname was Hector. He had big horn-like Buddy-Holly glasses.

CM : In the early sixties, when you were having your hits, not many people were carrying the ball for rock and roll like you were. You had the Bo Diddley rhythms and the Chuck Berry licks.

FC : In that era that I started in, you had all these bubble gum-type artists, pop-y. I was pushed into that group, but I never wanted it. I always though I was a rock and roll artist. The Fabians, Frankie Avalons, the [Bobby] Rydells and all of them, they wanted to be like Frank Sinatra, to be smooth. Their records were not rock music, to me. Rock and roll music is the Rolling Stones. “Tallahassee Lassie,” my first song, is definitely a Rolling Stones [type] record. I mean, that’s their bag. They would have killed it.

CM : How did you get to love rock and roll music so much ?

FC : Way, way back, when I was young, 13 or 14, I was listening to Hank Williams. Hank Williams was ahead of his time, for being a country act. You could pick three or four of those songs that he wrote and they could become rock records, rhythm and blues records : “Move It On Over” and some other ones too. From that, I listened to Big Joe Turner who was doing “Shake Rattle and Roll” and “Flip, Flop and Fly.” All that music was big in Boston. Then later on it was Chuck Berry.

Massachusetts radio played r&b; race music they called it back then, heavy. I just loved it. When I heard “Shake Rattle and Roll” by Big Joe Turner in 1954, I was dating my wife, Jeanette, and we live in California now. We were driving with my brother-in-law who married her sister. We were in a car, driving along Revere Beach—I come from Revere, Massachusetts, actually Lynn, it’s near Boston—and this record, unbelievable, it killed me. I heard that drum beat, that back beat. We were all pounding on the dash board. It was so good ! I can’t believe this record !

CM : That’s where the boom boom comes from !

FC : Yeah, that record. Why is black music so big in influencing the white acts, like myself, the Stones, you can go on and name a bunch of people. Listen to those early records—Big Joe Turner, Chuck Berry, Little Richard, Fats Domino, all those people who were the giant stars of that day and even before that, Muddy Waters and all—you’ll hear a heavy drum beat. It’s so dominant on the records. When we started to make the records, it wasn’t dominant. It didn’t stick out like it did then. That’s why the black music is so influential, even today with the rap music and all that, because they brought that big drum sound, right ?

CM : Do you know where that comes from ? It comes from gospel, from the handclaps. [sings and claps on 2 and 4 :] “down by the riverside.” 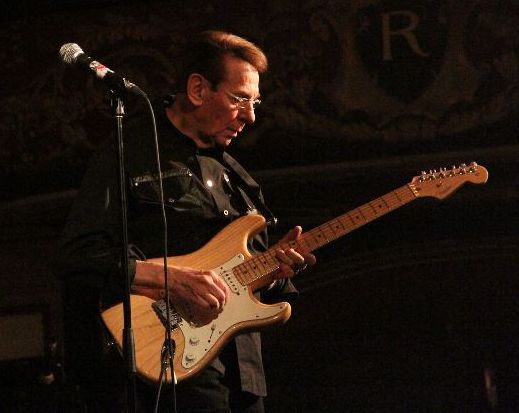 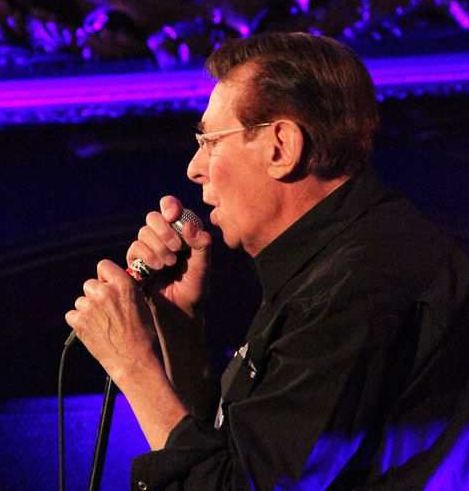 Freddy Cannon at the Rialto Theatre in Montreal, 2013. Photos by Daniel Torchinsky.